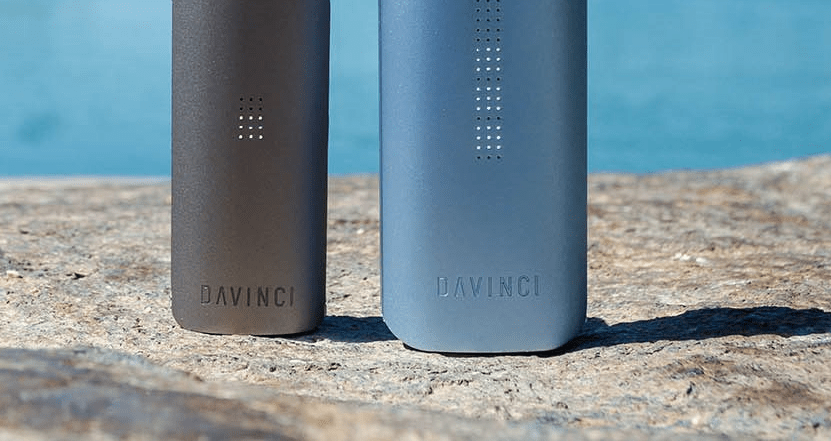 Released two years apart, the DaVinci IQ and DaVinci MIQRO are DaVinci’s flagship battery-powered vaporizers. These are without a doubt, two of the smallest and nicest looking vapes on the market. The IQ and MIQRO are priced like the fashionable devices they are, though, and that means not everyone can afford to own both.

The IQ and the MIQRO might look virtually the same on the surface, but DaVinci actually designed them for two fairly different customer bases. In addition, the fact that the MIQRO was released two years later also means that it is a refinement of the IQ in some ways. The fact that the MIQRO actually does some things better, even though it is the less expensive of the two devices, further adds to the difficulty in choosing which one to buy.

DaVinci has released a great pair of dry herb vaporizers, and we’re certain that you’re going to be pleased with either one. The fact that there are clear differences between the two, though, means that one will almost definitely work better for you than the other. Let’s break down the differences between the DaVinci IQ vs. MIQRO.

The DaVinci IQ and MIQRO both have removable batteries. That’s an unusual feature in the world of dry herb vaporizers. Having a removable battery means that you can carry spare batteries for increased vaping time away from a USB port. It also means that when your battery one day stops holding a charge, you can replace the battery rather than replacing the entire device! The IQ and MIQRO do use different types of battery cells, creating a substantial difference in the devices’ ability to deliver power.

Both the IQ and the MIQRO have a Boost Mode option available. To activate, simply hold the power button. Activating Boost Mode automatically heats the oven to its maximum possible temperature. Some people have mentioned that, when they use the DaVinci MIQRO, they keep Boost Mode enabled most of the time. That might have something to do with the MIQRO’s relatively low-power battery.

With a maximum dry herb capacity of about 0.5 grams, the oven of the DaVinci IQ is roughly double the size of the DaVinci MIQRO’s oven. If you’re a long-term dry herb user and tend to go through a lot of material, you might prefer the larger oven capacity of the IQ, as it’s possible you might not actually be able to get enough material into the MIQRO to reach your desired level of elevation in a single vaping session.

On the other hand, you might prefer the DaVinci MIQRO if you’re a fan of shorter vaping sessions that leave you feeling uplifted and energized rather than sleepy and medicated. The MIQRO also features a refined Pearl that makes it easy to reduce the capacity of the oven by up to half if you’d like to use even less material. The DaVinci IQ also has a Pearl, but it is less stable and doesn’t work as well for reducing the oven capacity.

One of the biggest differences between the DaVinci IQ and MIQRO is the fact that the MIQRO is substantially easier to clean because the entire vapour path is removable. Cleaning the DaVinci MIQRO is as simple as removing all components, soaking them briefly in rubbing alcohol and giving them a good rinse.

With the DaVinci IQ, the Flavour Chamber is removable, but the vapour path is not. Cleaning the small area between the Flavour Chamber and the underside of the oven requires you to use a long tool such as the included cleaning brush. The dirtier the device is, the more difficult cleaning it will become. So remember to clean your DaVinci IQ regularly!

One key technological difference between the DaVinci IQ and MIQRO is the fact that the IQ has Bluetooth and the MIQRO does not. DaVinci has a free iOS and Android app that you can use to fine-tune the device’s temperature and predefined Smart Path settings. Using a mobile app is undeniably an easier way to control your vaporizer compared to using the onboard buttons. You can access every function of the DaVinci MIQRO using the onboard buttons. However, some people may find that staring at a phone tends to make a vaping session a bit less enjoyable!

With longer battery life, quicker heating time and a bigger oven, its hard not to go with the IQ over the MIQRO. However, the MIQRO does improve upon many of the IQ’s shortcomings, and this small, discreet vaporizer may actually be the best device on the market for vaping outside of the home.

As befitting a premium-priced device, the DaVinci IQ includes a 10-year warranty against defects. The DaVinci MIQRO, meanwhile, has a 5-year warranty. NOTE: the DaVinci warranty will not cover damage from misuse or standard wear and tear.

Cannabis under the Microscope